Important note: These instructions specifically refer to embedding UPDD supplied in component form into an XPe image.  Since Sept 2011 it is our recommendation that the UPDD driver be installed during first boot and before locking down the image and we have documented this approach in a new embedded document here.

In this environment UPDD will be supplied as a number of separate components. Software sent via email will be held in the file upddxpe.zip to avoid the rejection by many mail servers of .exe files. Touch-Base utilizes virus detection software on all of our systems but recipients of the software should pass the files thought their own virus checking software before proceeding with installation.

Windows XP Embedded referred to as XPe in this document, is an embedded operating system. Embedded operating systems are built from various components and then ‘embedded’ on the target hardware. This document describes how to add UPDD to an embedded image. These instructions assume that the user has previously installed Windows XPe Target Designer, and is familiar with using this tool to create Windows XPe images, and installing the resulting image on a target system.

With conventional Windows systems, such as 98 and 2000, software is installed via a setup procedure or via the plug and play manager that requests the various device driver files to be made available at the time the device is connected to the system. In a plug and play situation a control file (.INF) informs the system of the files to be installed and where they are to be placed along with details of registry entries.

In embedded environments similar component control files are employed and in the case of XPe this file is known as a Component Object Definition file and is held with a .SLD suffix.

·         If UPDD is installed on an XPe system using the standard setup.exe file, typically to test the driver prior to embedding, UPDD installation has certain dependencies that need to be present for successful installation. One of the less obvious dependencies is the use of RegEdit during install to set up the registry. If RegEdit is not present all selections and dropdowns are blank.

·         If installing setup.exe on a XPe thin client system ensure virtual disk settings allow for sufficient space to install additional components. Typically if install issues any error between 31% and 38% progress this is due to failing copies.

·         We created the SLD file as an ASCII text file and in our English XPe build environment the file was accepted without error. However, one customer using a German build environment reported that the import of the SLD file gave an error along the lines of "A change between current and specified coding is not supported". If you encounter a similar error you need to convert the ASCII format .SLD file to a UNICODE format. The easiest way to achieve this is to open the SLD file in Notepad on a system having the same default language as the target and change the line <?xml version="1.0" encoding="UTF-8"?> to read <?xml version="1.0" encoding="UTF-16"?> and then use the save as option to save the file as Unicode (select "Unicode" as the encoding option on the Save As dialog). You can now import the amended file. Once we fully understand why this error occurs we may change our system to distribute UNICODE format SLD files in the future.

·         Some of the registry entries in the .SLD file use fixed pathnames to c:\program files\updd. If the software is installed in a different folder or hard disk location you will need to cater for this by changing the .SLD file prior to importing or editing the Registry Key data in the Component Designer after import. For UPDD 4.1.x only any references in the included tbupdd.ini file must also be updated.

·         The default driver settings defined in the .SLD (4.0.x) / tbupdd.ini (4.1.x) file reflect the standard setting we have for the controller in our production system.  In a normal Windows environment these setting can be changed after installation and saved. In an XPe environment it may be required to change these entries in the appropriate file prior to import. E.g. For a serial controller we may default the com port to be Com1 whereas it is actually plugged in to a different com port. We trust the registry entries are self-explanatory but further explanation is available in the UPDD SDK documentation.

·         For PS/2 devices it is important that the image does not include a PS/2 mouse driver. Further, the controller’s PnP id as defined in UPDD’s INF file (UPDDV3MO.INF) must match the PnP id of the PS/2 port.

·         After creation of the XPe image it should be deployed and executed on test hardware. During the first execution of the image the First Boot Agent (FBA) will be started and will configure various system components.  After the FBA has completed and the UPDD driver is working as expected and the machine has restarted, the resulting configured image should be deployed on the target hardware. For more advanced image cloning and deployment methods see the MSDN web page Configuring System Cloning


If using UPDD 4.0.x, in some circumstances we have found that the touch does not work after the FBA has run and it may be necessary to reload the driver or select ‘Redetect PnP device’ in the DCU to complete the UPDD registry settings.

If using UPDD 4.1.x, if a serial controller is being used then it should be configured after the FBA but before the system is cloned. The serial driver should first be installed by executing the following command on the machine:

It should be possible to run ‘rundll32.exe “C:\Program Files\UPDD\NonPnpIns.dll”,?InstallNonPnpDevice@@YAXXZ’ but this does not always invoke the serial service so it is best executed when the UPDD folder is the current directory as above.

After this command has been executed, open the UPDD Console and add a serial device by clicking the “Add a New Device” button on the Devices tab

Minor changes were made to the UPDD driver version 3.8.26 to cater for XPe so this version or greater should be used.

The following steps should be followed to add the UPDD driver into an XPe system: 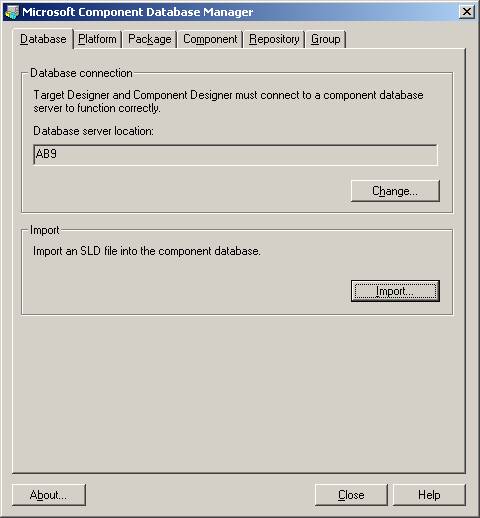 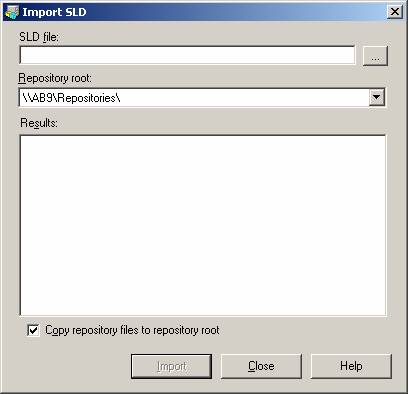 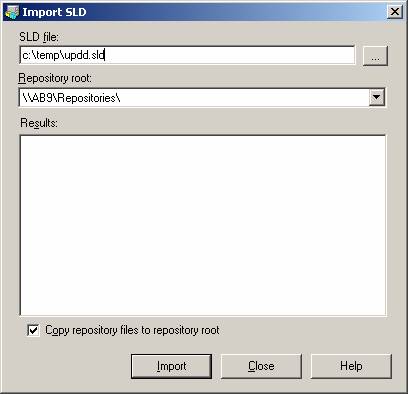 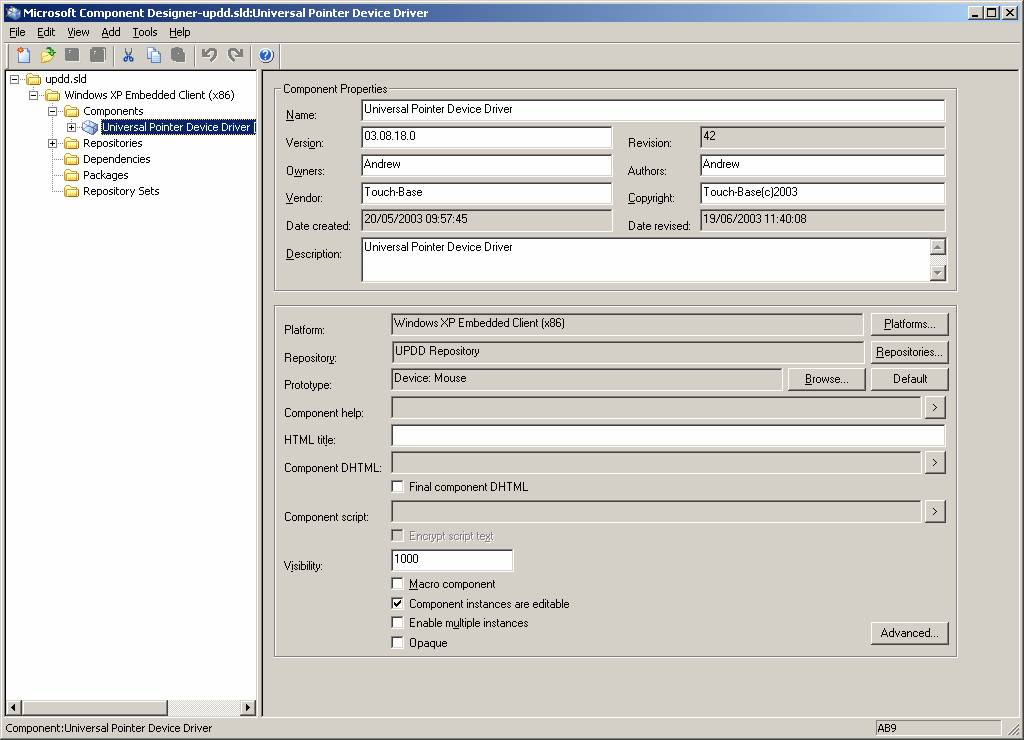 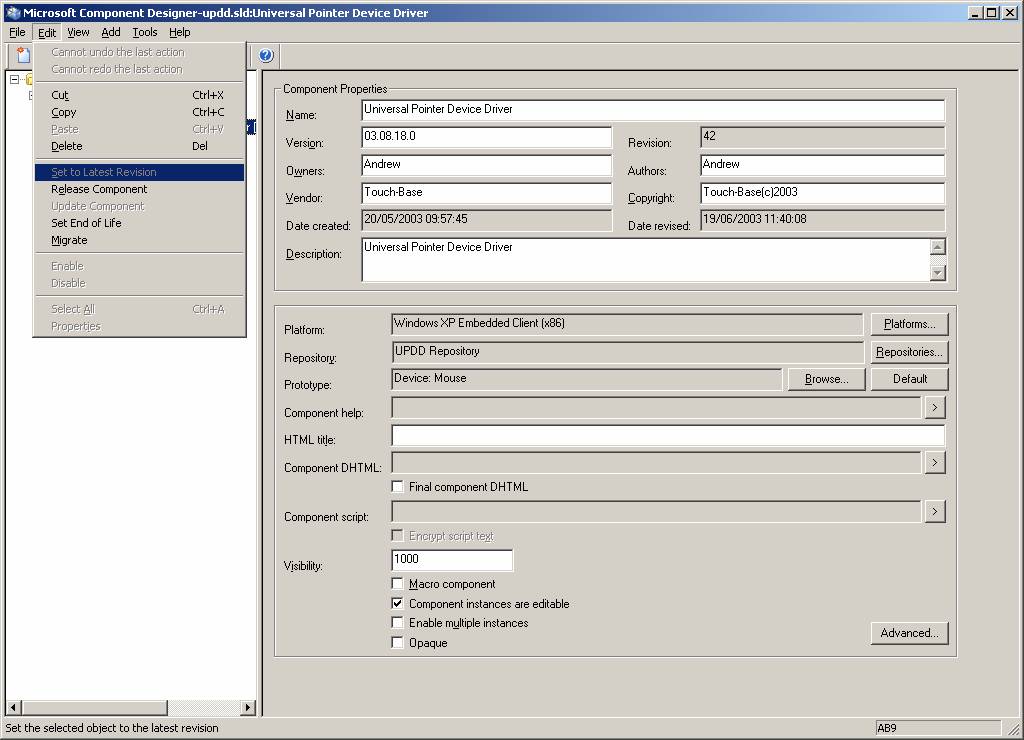 Figure 5 – Upgrading the driver to the latest revision 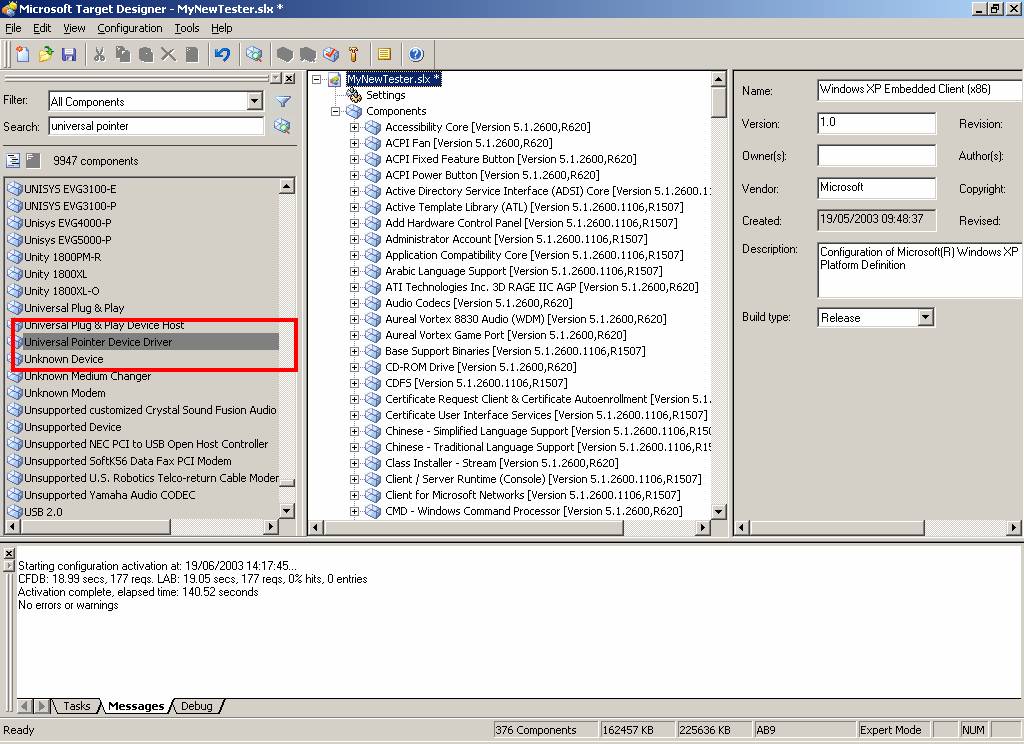 Figure 6 – The UPDD entry in the Component Browser 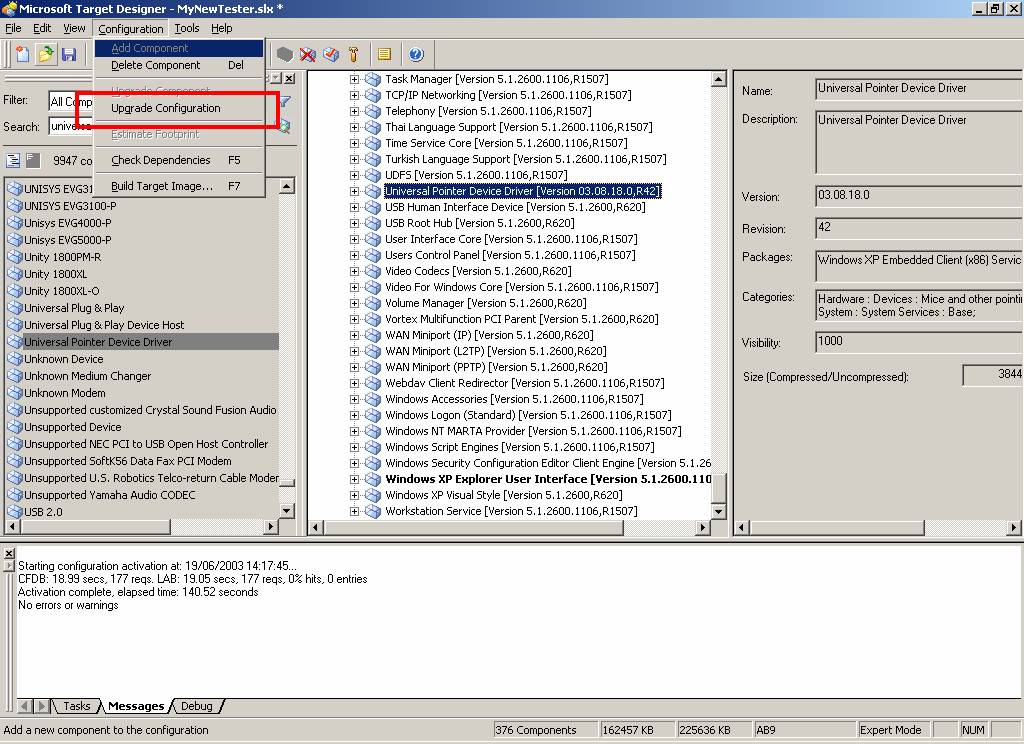 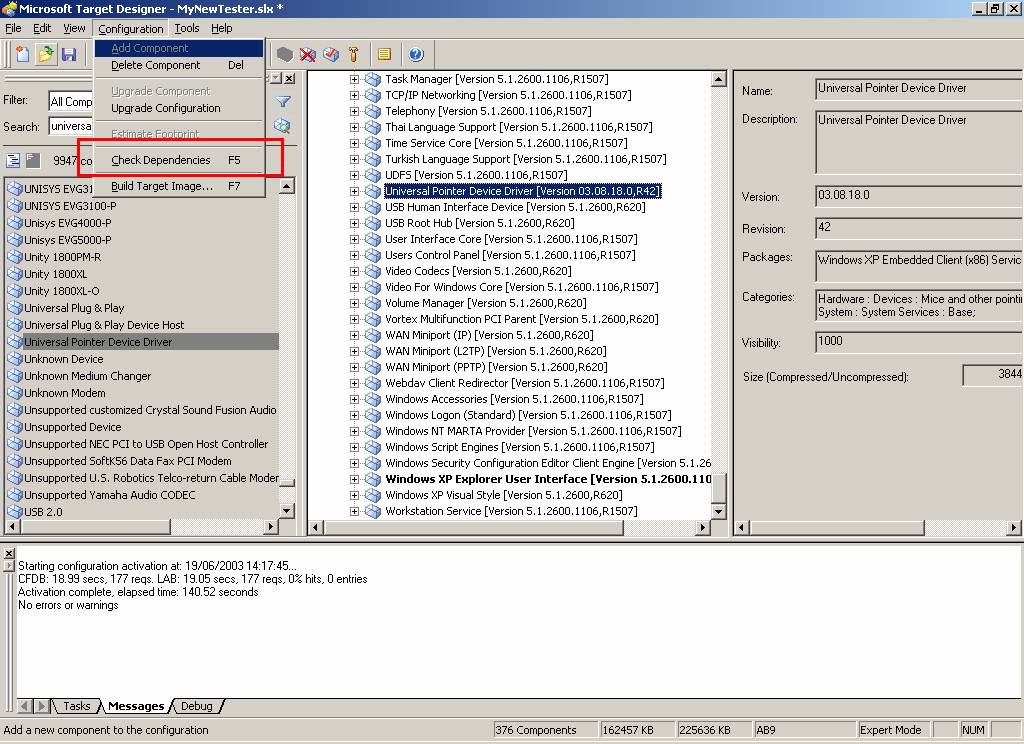 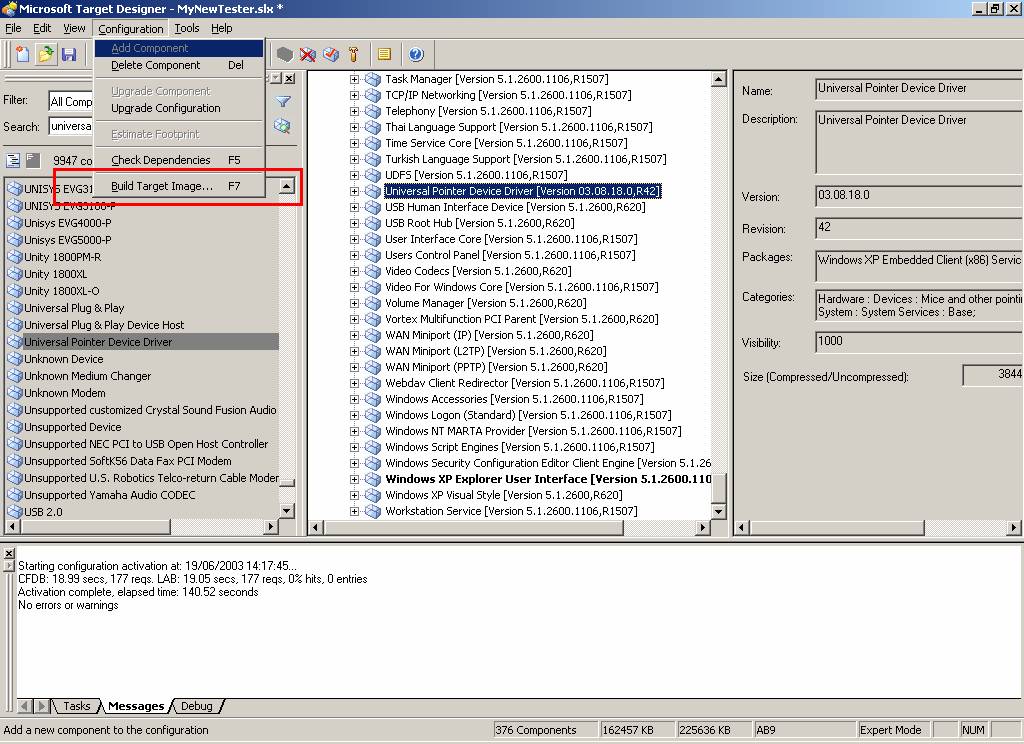 When creating an XPe image the integrator has a great deal of flexibility to tailor the finished image through the inclusion and exclusion of various system components. We cannot therefore provide comprehensive advice for every possible scenario, it is assumed that anyone attempting to produce an unusual or non-standard image will have sufficient knowledge of the XPe tool set and be able to resolve any missing dependencies. In the cause of difficulty please consult the XPe builder documentation.

UPDD
The UPDD package supplied for use with XP/e installs the complete UPDD package as it would be installed on a standard Windows desktop system. If an integrator wishes to install a minimal UPDD system which allows touch and calibration functions but otherwise operates with default settings please follow the follow these instructions.

Use the installation instructions above, but edit the SLD file to contain only the following modules:

Also edit the menu4.txt file leaving only the entry for tbcalib.exe

In order to build a minimal XPe image that will support UPDD, create an XPe image with the following components

Once these components are added then the standard XPe installation instructions should be followed.